The Theory of Everything

…and the Mathematical Probability of Happiness

Within most individual’s lives is a story which, if told properly, will tug your heartstrings and never let go. The Theory of Everything happens to be one of those stories. It’s a heartwarming tale of triumph over adversity; namely Professor Stephen Hawking’s relative victory over Lou Gehrig’s disease. An illness for which doctors, decades ago, gave him a life expectancy of merely two years.

Based loosely upon Jane Wilde Hawking’s memoirs we come across Mr. Hawking from the time he meets his future wife, and we leave him after he had just refused knighthood by the Queen of England.

Sometimes one can easily envision what a person looked like at a younger stage in their life and how that person’s mannerisms might have appeared. Without ever having seen footage or photos of a younger Mr. Hawking, prior to his acquiring ALS, I could almost intuitively recognize the uncanny resemblance Eddie Redmayne’s character bore to Mr. Hawking. That is, of course, a resemblance to a man I’ve never seen, met or knew of. All I’ve ever known of is the present day Stephen Hawking. It’s with that in mind that Eddie Redmayne carries the film forward. It’s his dramatic tribute to the man which we spend the rest of the film with, as we learn of the toll his affliction carries out on his life, his marriage, and upon his wife.

Bear in mind that a good portion of the film is spent with us witnessing the impact Stephen’s infirmity has on Jane. We learn of how he’s confronted with the notion of getting a nurse and his rejection of the idea for lack of means. Thus, it is Jane who tends to him and their children; and yes, they manage to bear three children. It’s she who suffers through the ordeal of caring for him in every way possible and in the end, it is Stephen’s decision that they separate. There are debates out there as to how much of the film strays from Jane’s original memoirs, thus veering for the sake of dramatic effect. Yours truly wouldn’t be able to participate in such a discussion without having read Jane’s works. It is only this film and what we’re presented with that we can review and judge.

The film isn’t without its own tragic mix of funny & terribly sad moments There’s a scene early on wherein Jane approaches Stephen and catches him watching a soap opera in an awfully miserable state. Stephen has already learned of his affliction by now, as has Jane. There he is, watching a soap opera on the telly and the following dialogue ensues: 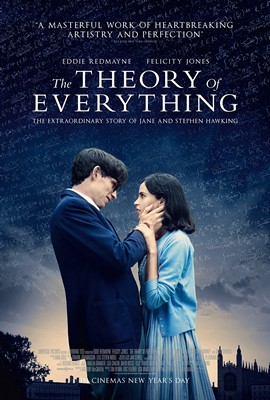 Stephen: (without looking at her) Very.

John is having an affair with Martha. But Martha is in love with Alan. And I think Alan is homosexual by the look of his shirts. I’m trying to work out the mathematical probability of happiness.

Jane: Are you close?

Stephen: It’s some integer of zero, but I’m not there yet.

Stephen: You just missed him. He was here earlier.

Jane: Don’t do this.

Thereafter Jane threatens to never see him again unless he goes outside with her to teach her how to play croquet. She does so thinking it’d be a way to stir him out of his misery. Moments later she’s outside watching him walk about, hitting the ball from one point to another; or rather trying to do so, since by now his gait, body language and overall movement have taken on the first semblances of someone stricken with the disease.

Such are the moments this film is filled with. Yet it is these scenes, almost too painful to watch, which lead us to other scenes making the audience, or this viewer at the very least, feel just as elated for Stephen as we, I, felt distressed. For instance, when Stephen is told by the examiners of his thesis that his findings on ‘a Spacetime Singularity’ are brilliant. Despite knowing what we already do about the exceptional Scientist, Dr. Hawking, one can’t help but feel elated for him.

My observations don’t end there though. With the previously mentioned comment about the ‘Mathematical Probability of Happiness’ one begins to get a better understanding of what’s to come; that is, the thinking which exists within the inner workings of Mr. Hawking’s mind. A mind that’s constantly hard at work in the face of adversity. Later in the film, after we’ve been introduced to Stephen’s nurse, and future second wife, she’s going over a method with him. One which his then wife, Jane, had already tried with no success. The use of a transparent board with letters grouped in colored areas; all for the sake of his communicating one letter at a time, since by now he’s lost the ability to speak and move. It’s Elaine who quickly comes to the realization that Stephen had already memorized the board. It’s through this scene and others that we come to truly comprehend the ceaseless pursuit of his calling through the magnificent mind that is his. It’s through such scenes that we know Stephen has never given up on life.

All in all, the film is a wonderful piece of work which I’d highly recommend to anyone, especially those familiar with the great professor. The dialogue, acting and direction are quite fine. Mind you, I’ve always believed that an exceptional score can often help turn a good film into a great one, and it’s Johann Johannsson’s music that does wonders for this film. I’ve been a big fan of Mr. Johannsson for years now and I’m not surprised to see how it’s become a major contender for Best Original Score. His musical pieces are truly beautiful.

Eddie Redmayne’s performance is absolutely amazing and there’s no question in my mind that he’ll win the Oscar for Best Performance by an Actor in a Leading Role. I cannot remember the last time I felt this strongly about an Oscar-worthy performance.

Felicity Jones is nominated for Best Performance by an Actress in a Leading Role and she was wonderful in this film as well, although I wouldn’t say her nomination is as well earned as Mr. Redmayne’s. Actually, I’d say it’s not even in the same arena; or even in the same town for that matter.

The picture as a whole, I believe, is worthy of the Best Picture nomination it’s garnered but considering the other films up for the same slot, I can’t see it winning. Regardless, The Theory of Everything is a gem.

Best Motion Picture of the Year:

Performance by an Actor in a Leading Role:

Performance by an Actress in a Leading Role:

Felicity Jones (“Jane Hawking” in The Theory of Everything) – This is her first nomination.