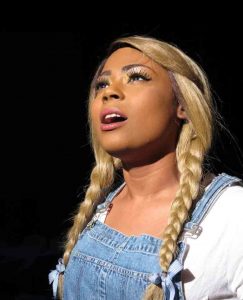 “The Wizard Of OZ,” Presented By Harlem Repertory Theatre and Yip Harburg Foundation, Extends Thru December 16.

Plays through DECEMBER 16, 2017. See detailed schedule below.
Tato Laviera Theatre, 240 East 123rd Street (near 2rd Ave.), Manhattan.
Produced by Harlem Repertory Theatre; co-produced by the Yip Harburg Foundation.
Remaining performance of current run — Sunday, August 20 at 7:00 PM
Extended dates — All performances are Saturdays at 3:00 PM: September 2 and 23, October 7 and 21, November 4 and 18, December 2 and 16, 2017.
A previously-scheduled performance September 9 at 7:00 PM has been canceled.
$10 general admission; $20 premium seating.
Buy tickets: SMARTTIX, (212) 868-4444, www.smarttix.com.
This production is recommended for ages 4 to 104.
Running time: 1 hour. (no intermission)
PHOTOS ARE AVAILABLE at https://goo.gl/photos/8wTzPEq6GHKBPJfC6
NEW YORK, August 15 — “The Wizard of Oz,” presented by Harlem Repertory Theater (HRT) and Yip Harburg Foundation, will not close August 20.  It has been extended through December 16, 2017 due to continuing and steady audience interest.  The production has played since October 8, 2016 at Tato Laviera Theatre, 240 East 123rd Street (near 2nd Ave.), Manhattan, and has previously been extended twice.
The classic musical is being mounted with a multi-racial cast, a jazzy underscore and authoritative dramaturgy by representatives of the Yip Harburg Foundation.  Director/choreographer is Keith Lee Grant, Artistic Director of Harlem Rep, who is in the midst of a four-year project of presenting classic musicals that have lyrics by E.Y. “Yip” Harburg.
Harlem Repertory Theatre recently opened “Jamaica,” which will play in rep with “The Wizard of Oz” this season as the company moves toward its Yip Harburg Festival.  The troupe will add a double bill of “Finian’s Rainbow” and “Flahooley” to its repertoire in 2018 and “Bloomer Girl” in 2019. The aim is to have four musicals running in repertory for the 2019-2020 seasons.
As of the end of this extension, on December 16, “The Wizard of Oz” will have played 36 performances.

“The Wizard of Oz,” with its timeless score and eternal allegories, is a magical experience for young (and young-at-heart) audiences. Based on MGM’s classic motion picture, the stage version mounted here follows John Kane’s adaptation for the Royal Shakespeare Company, which is based on the book by L. Frank Baum, with brilliant songs by lyricist E.Y. (“Yip”) Harburg and composer Harold Arlen.
Thanks to work of dramaturg Deena R. Harburg, President of the Yip Harburg Foundation, in association with acclaimed librettist Arthur Perlman, New York audiences have a chance to see the show sharpened to more of the original vision of E.Y. “Yip” Harburg, who was an unashamedly progressive thinker. The cast is multi-racial and features Latino, Black and Asian actors, fulfilling Yip’s vision of a multicultural universe. Dorothy, played by Taylor-Rey Rivera, is interpreted as a modern girl and future leader who is growing to realize the confidence she possesses. Her three Land-of-Oz friends–the Scarecrow, Tin Man and Cowardly Lion–are envisioned as people of great potential who only need to actualize the heart, brains and courage they already have. One of the story’s themes is how the weakness of adults forces children to seize their own destinies and, ironically, to grow up themselves. According to Ernie Harburg, Yip’s son and Founding President Emeritus of the Yip Harburg Foundation, Yip wanted to address Dorothy finally going home as a leader. At Harlem Rep, Dorothy will come home to lead the rebuilding of her family’s farm. All the “refocusing” is accomplished through the acting of the characters, without changing the iconic dialogue of the script.
Deena Harburg reminds us that “Oz” is also the story of three strong women–Dorothy and two witches–and illustrates how we need more woman leaders. Munchkinland and The Emerald City reflect Harburg’s utopian dreams of societies that are egalitarian, without dictatorship of monarchy or religion. Interestingly, “Over the Rainbow” actually expresses the dream of an immigrant–or a would-be immigrant–for a better life in a far away land, a theme of contemporary resonance. This classic song is under-appreciated for this original intent, but is a poignant message in our time, when callousness toward the immigrant is one of our leading socio-political concerns. In the film and its theater adaptation, the song is only sung once. But in this production, it’s reprised several times, once with a syncopated feel that is reminiscent of the now-famous rendition that was broadcast a few years back on TV’s “Glee” and recorded by Hawaiian singer Israel Kamakawiwo’ole.
Throughout the production, jazzy arrangements by Dan Aran are entwined with the classic arrangements in the score. These accents complement the singing of Taylor-Rey Rivera, who introduces jazz colorations to Dorothy’s solos with a soulful mezzo voice. The orchestra is an international jazz trio of Martha Kato (piano), Dan Aran (musical director and percussionist) and Yoshi Waki (bass).
The actors are Taylor-Rey Rivera as Dorothy, Daniel Tamulonis as the Professor/Wizard, Derrick Montalvo as Scarecrow, Erwin Vazquez as Lion, Ben Harburg as Tin Man, Barbyly Noël as Aunt Em and Glinda, Emily Ramirez as Miss Gulch and Wicked Witch of the West, Jenna Vega as Guard, Chris Price as Uncle Henry and Ensemble, and Paris Scott and Wilyuly Lopez as ensemble.
Lighting design is by Brian Aldous. Costume design is by Daniel Fergus Tamulonis. Projections are by Brian Blanco. Stage manager is Kyria Geneva.
E.Y. “Yip” Harburg was known in his lifetime as the “social conscience of Broadway.” He was lyricist of the Depression anthem “Brother Can You Spare a Dime?” and such classic Broadway musicals as the anti-racist, anti-capitalist “Finian’s Rainbow,” and the socially conscious “Jamaica,” “Bloomer Girl” and “Flahooley.” Much of what he wrote was charged with progressive social vision. Today, his most familiar achievements are the lyrics for the film “The Wizard of Oz” and its signature song, “Over the Rainbow.”
The Yip Harburg Foundation (www.yipharburg.com) was created after the lyricist’s death to carry on his legacy and to promote educational opportunity, social/economic justice and world peace. Its President is Yip’s son, Ernie Harburg, co-author of two books, “Who Put The Rainbow In The Wizard of OZ? Yip Harburg, Lyricist” and “The Broadway Musical: Collaboration in Commerce and Art.” Deena R. Harburg, dramaturg of this production, is the founding chair of the unique NYU Tisch Graduate Musical Theater Writing Program, and the author of “Fascinating Rhythm: The Collaboration of George and Ira Gershwin” and “The Music Makers.” She is Yip’s daughter-in-law and Ernie’s wife.
Director/choreographer Keith Lee Grant is Founding Artistic Director of Harlem Repertory Theatre and a Professor in the Department of Theatre and Speech at CCNY. He holds an MFA from the Yale School of Drama, an MA from Penn State and a Certificate from the American Conservatory Theater’s Advanced Training Program. He has directed and/or choreographed over 100 professional and university productions from “As You Like It, Pinero’s “Short Eyes,” Inge’s “Picnic” to the musicals “Sweeney Todd,” “A Little Night Music” and “Mame.” He has performed on Broadway in “Marie Christine,” “Showboat” and “Ragtime.” He has worked Off-Broadway at Playwrights Horizons, York Theater, Jewish Repertory Theater, New Federal Theatre, AMAS Rep and New York Theater Workshop, among others. His regional credits include Yale Rep, Syracuse Stage, and the Oregon Shakespeare Festival. His Harlem Rep productions of “The Wiz” (2009) and “Dreamgirls” (2012) each won two AUDELCO awards (Best Director of a Musical and Best Choreography of a Musical).
The Harlem Repertory Theatre (www.harlemrepertorytheatre.com) is a non-profit theater committed to producing artistically and intellectually challenging productions that explore the experiences of a diverse range of ethnic, social and cultural communities. It stages new works and established classic musicals and plays from bold and innovative perspectives that challenge and/or reflect the Harlem community’s cultural and social values. The troupe, under the leadership of Keith Lee Grant, has been in an ongoing exploration of Yip Harburg’s work. It staged a critically-praised rendition of “Flahooley” at Harlem Rep and Theater for the New City in 2009-10.