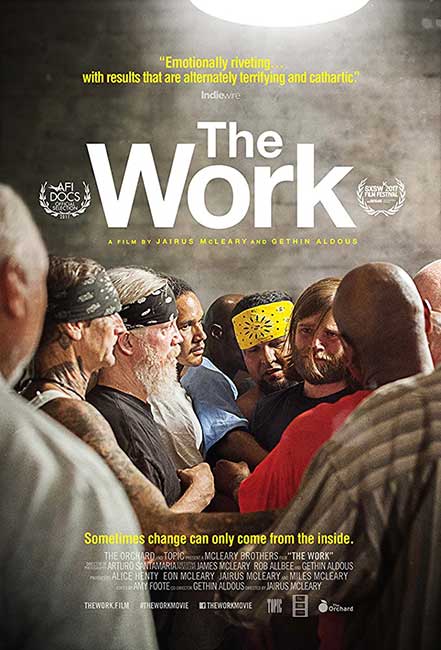 Inside New Folsom Prison, convicts meet weekly for group therapy as part of a rehabilitation program. Most are serving long sentences for violent or gang-related crimes. Twice a year, with prison approval, members of the public are invited to join the convicts for four days of intensive group therapy. Convicts agree to leave gang politics at the door, setting aside the racial segregation of the year. Some convicts have participated in this event many times. For others, this will be their first. Men from the outside joining for the first time choose two convicts with previous experience to be their guides.

The Work is a documentary which follows three of these participants.

We’re introduced to and hear from:

“”I’d heard about the program through a friend, and I think that this is a path that I need to take to better find out who I am as a person … as far as, growing up in the streets and positively (possibly?) being one of these inmates.””

“”My desire to do this is to get shaken out of whatever it is that’s keeping me stuck. When I thought about the opportunity, it seemed just crazy enough to wake me up a little bit. But I haven’t yet decided how I feel about a hardened criminal who killed somebody and is working through how to deal with that. I don’t know how to feel about that. I’ve never met a person who killed another person.””

“”It’ll be scary, but that’s what kind of, sort of keeps me interested in it. Like the sensation of me being in danger has a draw to it, because it’s not like the humdrum, get in your car, drive to work, go home, drive to the gym, come back, eat dinner, watch TV.””

Watching this film was as heartening an experience as they come. For I, like so many others, have spent years in search of peace from within and without. It’s the ‘within’ portion that’s the most rocky part of the journey since we come face to face with our own demons, our own selves and all the baggage that comes along with the stare-down. It’s through this film that we witness the ‘work’ put forth by these volunteers as well as some of the actual prisoners.

We live in a world of anguish, pain and hatred because of the people who dwell upon it. A planet whose inhabitants could learn a lesson from this extraordinary film and a collective dose of self-discovery and awareness. Unfortunately, too many of our fellow humans have their own fears of intimacy, healing and self-discovery; and are either unwilling to take those necessary steps or are lost in their respective blindness.

The men featured within should be praised for the steps taken on their own behalf. If only creations such as this film weren’t so rare. There were moments that moved me to tears and it may very well do the same for you. I thank the filmmakers for this fine documentary.

Within the closing credits are the following words declaring the success of the program:

In the last seventeen years over forty convicts, many lifelong criminals have been released from prison after attending this program. Not one has returned.

The non-profit organization that helps make all this possible is the Inside Circle Foundation.

Its mission statement at the official site is as follows:

The Inside Circle Foundation (ICF) is a not for profit organization (501c3) dedicated to the inner personal growth of men in prison. The goal of the ICF is to create environments in which prisoners can work and explore the issues in their lives that have prevented them from living up to their full potential as human beings. In these environments the ICF primarily utilizes self-help discussion groups and creative writing techniques such as journaling, autobiography, and poetry to achieve the inner development necessary to become healthy contributing members of our society.

Key figures, from that organization, appearing within the group therapy settings include:
(The following bios are borrowed from the ICF website.)

James McLeary, who holds graduate degrees in health law and clinical psychology. He has worked with management teams in educational, corporate, and government institutions providing clarity and insight into communication and solution strategies. His experience ranges from leading educational corporate seminars, to providing crisis management in correctional institutions with members of organized crime. His company is designed to explore Human Involution in individuals and groups, and is a principal consultant at JMC Strategic Solutions.

Robert S. Allbee has been the Executive Director/Founder of the Inside Circle Foundation, a not for profit prison outreach program, since 1997. Prior to that he volunteered as a creative writing instructor through the Arts-in-Corrections program at Folsom Prison and had extensive experience facilitating men’s groups. Since his recovery from the criminality and drug abuse of his younger life he has launched and operates Allbee Construction as a successful building contractor specializing in timber frame custom homes. As the father of three adult sons and grandfather he dedicates most of his time now to his family and mentoring men from the streets and in prison. He is the author of three books of poetry and prose entitled “Digging In The Dirt”, “My Grandfather’s House” and “Lion That Catches Fire”. With a new book due out next year he continues ongoing reading and speaking engagements.