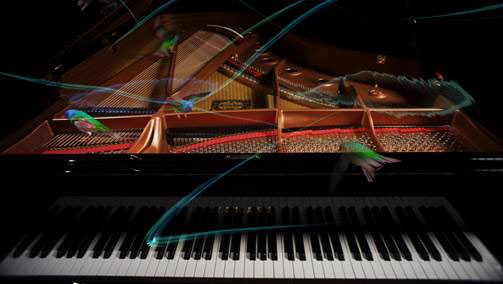 NEW YORK, NY (July 8, 2022) – Rockefeller Center presents artist Sarah Meyohas’s Dawn Chorus and Speculations at Top of the Rock Observation Deck. Top of the Rock ticket holders will have access to two presentations by Meyohas, both on display beginning July 15 through September 12.

Dawn Chorus is an immersive and interactive, multi-sensory, augmented-reality experience that delights viewers with holographic birds fluttering around a physical Yamaha Disklavier player piano. These birds land on the piano initiating a chain reaction of audible phenomena. Birds are intrinsically related to music, so much so that we have come to call their communication “bird song,” and their seemingly choral singing at dawn the “dawn chorus.” By virtue of the way their feathers reflect light, some birds also manifest “structural color,” which refers to the most vivid colors in nature. Unlike pigments, which produce color by absorption of specific wavelengths of light, structural color involves the reflection of light within a material.

In Dawn Chorus, while the birds are the protagonists of a magnificent opera of sound and color, the piano is the stand-in for the fountain, a mythological trope (e.g., the fountain of youth, the fountain of life, etc.). The composition of the soundtrack that emanates from the speakers is itself a composite made up of several elements: recordings of “electromagnetic dawn chorus,” a phenomenon that refers to radio waves being converted at dawn with the use of proper radio equipment to sounds that resemble birds’ dawn chorus by coincidence; the flute, the instrument most akin to bird song; actual dawn chorus; and, the sound of the piano playing two distinct scripts.

The first composition is developed algorithmically and is statistically similar to sections from whole-tone scale compositions, or compositions in “augmented scale,” built from notes with intervals of a whole note, poetically rhyming with the “augmented reality” offered by HoloLens. Examples that come to mind are the work of composer and ornithologist Olivier Messiaen and Franz Liszt’s Water Games at Villa d’Este, upon hearing which, it is not hard to imagine birds of paradise at ecstatic play in the countless fountains of the Villa. The second script was commissioned for Dawn Chorus from a contemporary French composer named David François Moreau. Dawn Chorus invites visitors to experience the superimposition of not only different kinds of human and artificial intelligence, but also the innate intelligence of the natural world, through a cyborgesque constellation of hardware and software. To learn more about the work, please click here.

Also on view at Top of the Rock, Meyohas will display eight large-scale photographs titled Speculations as vinyl installations on the glass panels overlooking the New York City skyline. These works, created through the manipulation of physical reflective surfaces and water, portray perspectival tunnels extending into infinity.

Sarah Meyohas (b. 1991, New York) is a conceptual artist and pioneer in the field of crypto art, whose practice considers the nature and capabilities of emerging technologies in contemporary society. In 2015, Meyohas created Bitchcoin, a cryptocurrency backed by her physical artwork. Predating the launch of Ethereum, Bitchcoin is the first tokenization of physical art on a blockchain, effectively a “proto-NFT.” Using the familiar emblems of biological life, Meyohas investigates the complex operations that increasingly govern our world: soaring birds, created using augmented-reality software, flock in unison with the frenetic variations of the stock market; rose petals, aggregately identical but individually unique, comprise the dataset for their AI-created equivalents; Bitchcoin, a cryptocurrency backed by physical artworks, questions the speculative value of cryptocurrency and the ineffable value of art. Meyohas creates an intelligible visual language to articulate the systems and technologies that increasingly influence our world.

Meyohas’s work has been exhibited in New York at Red Bull Arts, 303 Gallery, and the New Museum of Contemporary Art and internationally at institutions including the Barbican Centre, London, the Jameel Arts Center, Dubai, and the Ming Contemporary Art Museum, Shanghai. She has been featured in The Wall Street Journal, The Financial Times, The New York Times, Vice, and Artforum, and has appeared on CNBC, PBS, and CBC. Her film Cloud of Petals has been screened at various film festivals worldwide, including the Slamdance Film Festival and the Locarno Film Festival. In 2017 she was named to the Forbes 30 under 30 list. Meyohas holds dual degrees in Finance and International Relations from the University of Pennsylvania and in 2015 received her M.F.A. from Yale University. Sarah Meyohas is represented by Marianne Boesky Gallery, which will present a major solo exhibition of the artist in 2023. For more information, please visit sarahmeyohas.com or reach out to Emil Gombos at [email protected] or Kelly Woods, Senior Director, Marianne Boesky Gallery at [email protected].

Dawn Chorus is presented in collaboration with Yamaha and Microsoft. Rockefeller Center and Sarah Meyohas would like to thank Yamaha for their generous loan of their Yamaha Disklavier DC7X ENSPIRE PRO, and Microsoft for the HoloLens 2 headsets for the exhibition.