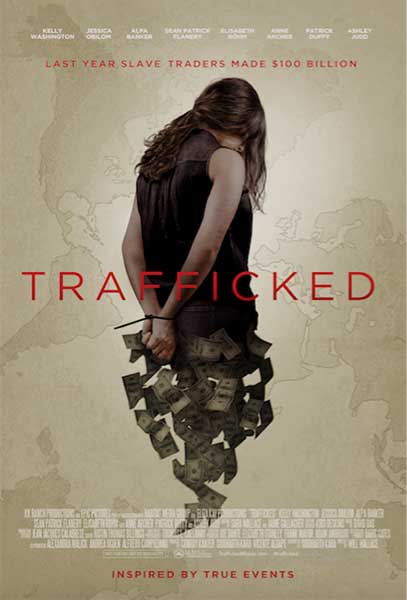 Victims trafficked into the United States every year are numbered in the thousands. Trafficked is the fictionalized story of girls, not only from America but from far away nations caught up in the nightmare of the human sex trade right here in our country.

This film is as raw, brutal and disturbing as any filmmaker could possibly drum up. It’s not for the squeamish and perhaps deservedly so. It’s not the sort of topic that should be treated with kid gloves.

One can’t imagine a more appropriate story for such a subject. Just as it should be with any feature film wishing to captivate its audience, Trafficked does much more. Its intense plot manages to take hold of you without letting go. The winning cast members, filled with familiar and unfamiliar faces do a stellar job with their respective roles. I was convinced of each individual character’s plight, menace and concern as well as with the overall outcome of the story; not that I have much knowledge on the matter, but then, neither do most folks. That there, may very well be the point of this cinematic creation. To bring to light the moral and social dilemma that is modern day slavery whether it exists as debt bondage, sex slavery or any in any other form. It’s the sort of work that’ll get you thinking and discussing the subject and maybe wanting to research it further on your own.

The film comes to us from Siddharth Kara, a former investment banker, and now award winning author. His books on the subject of sex slavery are as follows: Sex Trafficking: Inside the Business of Modern Slavery, Modern Slavery: A Global Perspective, and Bonded Labor: Tackling the System of Slavery in South Asia; books which’ve come to us after over a decade of investigative international research.

We thank Mr. Kara for bringing this abominable atrocity to the screen. We’ll be adding his name to our list of people to keep an eye out for.