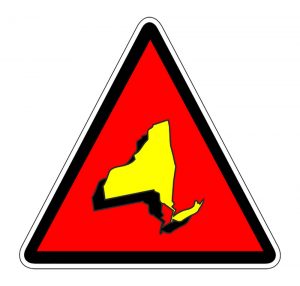 Trump, Cuomo and Rhode Island Governor Gina Raimondo on the Isolation of New York through Quarantine and Travel Restrictions

Due to extensive community transmission of COVID -19 in the area, CDC urges residents of New York, New Jersey, and Connecticut to refrain from non-essential domestic travel for 14 days effective immediately.  This Domestic Travel Advisory does not apply to employees of critical infrastructure industries, including but not limited to trucking, public health professionals, financial services, and food supply.  These employees of critical infrastructure, as defined by the Department of Homeland Security (https://www.cisa.gov/publication/guidance-essential-critical-infrastructure-workforceexternal icon), have a special responsibility to maintain normal work schedules.  The Governors of New York, New Jersey, and Connecticut will have full discretion to implement this Domestic Travel Advisory.

President Trump on Saturday, in response to questions, stated that the Tristate area of NY, NJ and parts of CT might go through an enforceable quarantine of two weeks due to the high rates of infection and residents of these areas traveling to Florida (which he pointed to specifically).

Trump: I spoke with DeSantis (Governor of Florida) Some people would like to see New York Quarantined because it’s a hot spot. New York, New Jersey maybe one or two other places. Certain parts of Connecticut quarantined. I’m thinking about that right now. We might not have to do it but there’s a possibility that sometime today we’ll do a quarantine short term two weeks on New York, probably New Jersey and certain parts of Connecticut.

Question: Restricted travel from those places?

Trump: Restrict travel because they’re having problems down in Florida. A lot of New Yorkers going there, we don’t want that. Heavily infected. We’re having a really good dialogue with Governor Cuomo…

Question: Would that be a more enforceable kind of quarantine, sir?

Trump: Well this would be an enforceable quarantine. You know, I’d rather not do it, but we may need it.

Later, during his daily press briefing on the state’s dealing with the Coronavirus pandemic, NY State Governor Andrew Cuomo would state how he’s no knowledge of a quarantine on New York or otherwise. He’d state as well how he doesn’t know what that means.

Question: The President said that he’s looking at some sort of enforceable quarantine for New York, New Jersey, parts of the Tri-state area. Is that a sound policy from your perspective or would you advise against it?

In related news, Rhode Island Governor signed an Executive Order on March 26 declaring quarantine restrictions on travelers from New York State. In the past 24 hours news reports have been surfacing about how Rhode Island Police and National Guard were taking bold and aggressive steps towards finding and isolating New Yorkers who’ve traveled into Rhode Island. Such security forces have been going from home to home as well as stopping cars with New York State license plates.

A portion of the Excecutive Order is detailed here:

WHEREAS, on March 13, 2020, I issued Executive Order 20-03 imposing quarantine restrictions on persons returning to Rhode Island from outside the 50 states or the District of Columbia;

WHEREAS, there are now numerous COVID-19 clusters or hotspots in states throughout the country;

WHEREAS, one such hotspot is the State of New York which has more than 37,000 confirmed cases of COVID-19, close to half of all the reported cases in the United States;

and WHEREAS, many residents of New York State also have second homes in Rhode Island where they may be heading for refuge