Venus Over Manhattan To Present

The First Exhibition Devoted To The 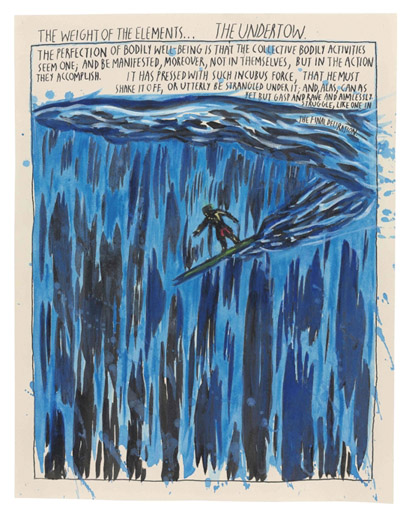 New York, NY…Since the 1970s, Los Angeles-based artist Raymond Pettibon has been metabolizing America – its history, literature, sports, religion, politics, and sexuality – in a barrage of drawings and paintings in a style born of comic books and the “do-it-yourself” aesthetic of Southern California punk rock album-covers, concert flyers, and fanzines. Limning a dizzying array of topics with his distinctive combinations of image and text, Pettibon has created a vocabulary of symbols that reappear consistently if enigmatically across his oeuvre. These range from baseball players, vixens, light bulbs, and railway trains, to the cartoon character Gumby and infamous murderer Charles Manson: pet themes repeated and reworked in a classically American combination of abundance and monotony. But the most poetic and revealing of Pettibon’s symbols may be the surfer, the solitary longboarder challenging a massive wave. In his “surfer paintings,” viewers find the lyrical heart of Pettion’s work and ride along with a counter-culture existentialist hero who perhaps is the artist’s nearest proxy.

Beginning April 3, 2014, Venus Over Manhattan will present the first exhibition ever organized to focus exclusively on Raymond Pettibon’s ‘surfer paintings.’ Are Your Motives Pure? Raymond Pettibon Surfers 1987-2012, brings together forty works spanning a quarter century of the artist’s career, on loan from important collections. Among works on view are early small-scale, monochrome India ink paintings; numerous paintings from the 1990s when the artist introduced color to his work; and a group of rare, large-scale paintings measuring up to nearly 10 feet wide – bravura works replete with the fluid dynamism of Pettibon’s line and the enduring potency of a favorite metaphor.

Are Your Motives Pure? Raymond Pettibon Surfers 1987-2012 will remain on view through May 17th.

Almost all of the paintings on view at Venus Over Manhattan depict an ocean roiling with beautiful, chaotic swells, accompanied by meandering texts, non-sequiturs, quotations, and bits of poetry in the artist’s handwriting. The exhibition takes its title from the earliest work on view, Untitled (Are Your Motives Pure?), (1987), a black ink painting showing a lone surfer cutting his line across the face of a towering wall of water; above this scene floats the artist’s seemingly rhetorical question. Echoed by two similar compositions from the same year, this small work throws the power of Pettibon’s surfer theme into high relief. The remarkable energy of the ocean and the epic solitude of the man testing it are undiminished by the small dimensions of Pettibon’s picture plane.

The monochrome India ink of Pettibon’s early surfers gave way to more vivid paintings in the 1990s, when he first introduced color through use of pencil, watercolor, gouache, pen, and acrylic paint. The exhibition includes numerous works from this period. By 2000, the surfer paintings became more complex and monumental, and the artist’s arcane associations and analogies are more visible, albeit more seemingly random. Untitled (That fact of…), (2003), couples surfer and wave with an atomic mushroom cloud and text that restates Sir Isaac Newton’s Third Law of Physics. “For every action,” Pettibon inscribes at the bottom of his frame, “there is an equal and opposite chain reaction in store.” In other paintings, the surfer finds himself in the company of others – a seabird here (Untitled (I have little dominion) of 2007), fellow travelers there (Untitled (I’ll go with…) of 2003). In Untitled (Outside! moondoggie was…), (2013), a UFO zooms over the horizon beyond a beach where surfers gawk. But Pettibon’s recent monumental paintings are epics consistently devoted to the vast force of Nature herself. On the surface of a giant blue wall of water, the tiny figure of the speeding surfer invites reflection on the life of an artist, on ego and fame, naiveté and bravery, loneliness and mortality.

Though he lives and works in the storied beach town of Venice, California, Pettibon is not a surfer. Nor can the paintings on view at Venus Over Manhattan be considered “surfer art;” they do not attempt to represent a real surfing scene. Instead, Pettibon is elevating the surfer to the top of his repertory of American icons, tracing the figure’s arc through the terrifying and chaotic ocean of life in a manner perhaps more evocative of Edward Hopper than The Endless Summer. Pettibon’s joy in the mythology of surfing is palpable in his sincere images, but fate hovers just beyond his frame, where the crash of his wave will end the surfer’s fleeting moment of glory. Pettibon’s work succeeds in suspending our disbelief.

About the Artist
Born in 1957 in Tuscon, Arizona, Raymond Pettibon has lived and worked in Southern California since the 1970s. Since his emergence on the art scene in the 1980s, the self-trained artist’s work has been exhibited widely in the United States and internationally. Prominent venues which have held recent solo exhibitions of Pettibon’s work include the Kunstmuseum Luzern, Lucerne, Switzerland (2012); Kestnergesellschaft, Hanover (2007); Kunsthalle Wien, Vienna; Centro de Arte Contemporáneo de Málaga, Spain (both 2006); Museum of Contemporary Art San Diego, La Jolla, California; and the Whitney Museum of American Art, New York (both 2005). In 1998, he had his first American museum presentation, organized by The Renaissance Society at the University of Chicago in collaboration with the Philadelphia Museum of Art, which traveled to The Drawing Center, New York and the Museum of Contemporary Art, Los Angeles. He has participated in a number of group exhibitions worldwide, including the Istanbul Biennial (2011); Liverpool Biennial (2010); SITE Santa Fe, New Mexico (2010 and 2004); Venice Biennale (2007 and 1999); Whitney Biennial, Whitney Museum of American Art, New York (2004, 1997, 1993, and 1991); and documenta XI, Kassel, Germany (2002).

About Venus Over Manhattan
Venus Over  Manhattan was founded by Adam Lindemann as a curatorial platform for exhibition and projects that expand upon the conventional gallery format through collaborations with artists, dealers, collectors, curators, and institutions. Shows include works of art and design that range from historic to contemporary.