“Wake Me at Midnight” 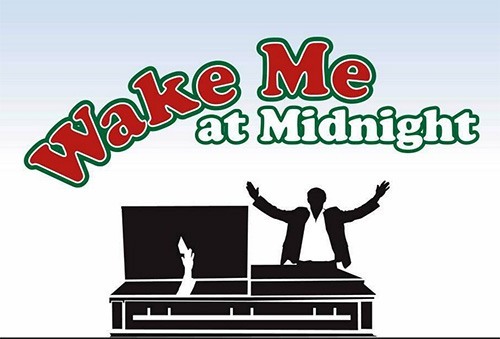 Tickets $25 Advanced Ticket Purchase through, Theatermania.com
or by calling Ovation Tickets: 866-811-4111
A Limited Number of Tickets will be sold at the Box Office Only Day of and At Time of Show, Cash Only
Trains: A,C,D, N,R,Q, 1,2,3 to 42nd Street/Times Square
“Wake Me at Midnight” “A dysfunctional Italian American family gathers at a Brooklyn funeral parlor to view their somewhat beloved dead uncle.”
Uncle Joey, a favorite rogue uncle of a Brooklyn Italian-American family has passed away and the family and well-wishers are at a Brooklyn funeral home for his wake.  Neighborhood types, those who escaped, and those who married or dated into the family are all present.
The main character, Ted Santi,  is under stress as he will encounter all these people who has not
done absolutely well by.  He owes all much money as he has devoted himself to playwriting and is living month to month, though much happier than when he had a sales job.  Unfortunately, he likes to gamble, and ends up owing money to a local bookie who he grew up with.  It’s an awkward situation for all.
Ex-wives, ex-girlfriends, and older relatives all conspire to give him a major headache when all he wants to do is pay his respects to his dead uncle.  His dead uncle leaves a letter with a puzzle: find a hidden, winning lottery ticket, by midnight
(statute of limitations) and all his financial problems are resolved. If not, they intensify.
The cast includes: Wendy Lazarus (Aunt Rose, the family matriarch), Jake Trissler (Sal – Ted’s cousin),
Eddie Capuano (Carmine-the bookie and local hood), Mark Lobene (Tommy – Ted’s brother and supporter),
Jill Butterfield (Molly, Ted’s current girlfriend),
Hank Moris, yes, that’s what they call her! (Kari, Ted’s ex-girlfriend)
Lisa Sposato (Pam, his ex-wife) and Hugh Buller (Kyle, the funeral director’s nephew)
Get ready for the surprise ending, which will  lead to lots of laughs.
For Tickets:  http://www.theatermania.com/off-off-broadway/shows/wake-me-at-midnight_300034/
or by phone Ovation: 866-811-4111.
Please Visit and Like their Facebook Page: www.facebook.com/WakeMeAtMidnight
Cultural Manhattan Theater
Share. Facebook Twitter Pinterest LinkedIn Tumblr Email
Previous ArticleBrooke Jackman Foundation Fourth Annual Read-A-Thon Saturday, September 7, 12:00 pm, 2013
Next Article Upcoming Events at Fort Tryon Park in September 2013