Why, How and When did Mayor de Blasio Decide to open 100 Miles of Space?

Today it was announced that 40 miles of street closures, sidewalk widening, and extra bike lanes would be implemented over the coming month with the eventual plan of increasing that number to 100 miles. Mayor Bill de Blasio would make the initial announcement during his daily COVID-19 Response Press Conference and NYC Council Speaker Corey Johnson would follow up with a press release.

This development can be touted as a major win for the Speaker, Council Member Carlina Rivera and New Yorkers in favor of expanded open spaces within the city. Ms. Rivera and Mr. Johnson had introduced a bill (Int 1933-2020) on Friday, April 24 which was to mandate the following:

This bill would require the Department of Transportation (“DOT”) to provide additional street space to pedestrians and cyclists on no less than 75 centerline miles of streets while COVID-19 social distancing requirements are in place. Such space would be created through the implementation of shared streets or the closure of at least one lane on a street to vehicular traffic.

The Mayor has continuously rejected the plans set forth by Mr. Johnson and so this declaration today comes as a major surprise – especially, considering the statements given by two officials at the bill’s introduction.  It’s not clear as to exactly when a decision was made. Was it over the past 24 hours? Was it due to pressure? We can’t for certain answer those questions. Have a look at that which is presented below so you can arrive at your own conclusions. 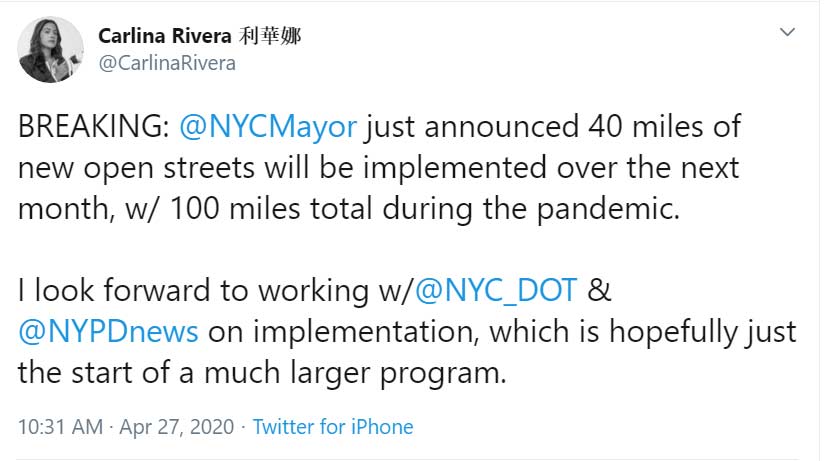 Opposition to the proposal

For some time, Mayor de Blasio has voiced his rejection of the proposal citing the NYPD’s inability to properly patrol and enforce street closures due to a decrease in the available personnel. He would also make mention of how dangerous it would be should a motorist inadvertently drive down an newly designated closed street.

Mayor de Blasio: “Some of the models around the country are more of an honor system kind of model, where the streets are closed off but not in a way that is entirely secure and there’s no enforcement and you sort of hoping that drivers do not end up on those streets, and I’m worried about that kind of model. Now if we can find a way to do some of these streets that did not require a lot of NYPD presence but still are truly safe and secure, I would definitely be open to that.”

“But the problem to date has been we do not want to create a new gathering point because that would violate social distancing. We don’t want to create a new safety problem where we would need enforcement but we don’t have it. But if we can find a way to address those issues, of course I’m interested and you know, up to date the – I mean up to now the problem has been the NYPD, the personnel levels have been way, way low because of this disease.”

On the day of the bill’s introduction, DOT Commissioner Polly Trottenberg and Transportation Bureau Chief Michael Pilecki were on hand to voice how the plan simply was not a viable one.

“The level of manpower that would be necessitated to ensure this proposal is executed safely. At the peak of this crisis, just last week, the department had a daily sick count of over 7,000 officers or nearly 20% of our uniformed officers. We are still seeing daily sick reports of between 4,000 and 5,000 officers. Which is about 4 or 5 times higher than the norm. During these daily manpower deficits we had to deploy our resources strategically to those areas most in need…”

He would also go on to say “If the intent is to mimic the mix used streets model that Oakland would be installing then I would urge caution. This is a situation that has the potential to severely impact public safety as pedestrians may be lulled into a false sense of safety and complacency by streets that appear to be closed to traffic but are in fact not.”

So what got things going?

It’s not clear what changed the Mayor’s mind or that of the NYPD. The Mayor’s repeatedly made clear his opposition. On Friday, we had Mr. Pilecki and Ms. Trottenberg give near damning testimonies. Yesterday, Sunday April 26, the Council Speaker tweeted the following while linking to an Opinion article at the NY Times titled ‘How to Save Summer 2020’:

“If the Mayor won’t open streets to New Yorkers, who so desperately need safe public spaces right now, the NYC Council will look to the Governor for leadership on this issue. We are prepared to work with the State to make this happen.” 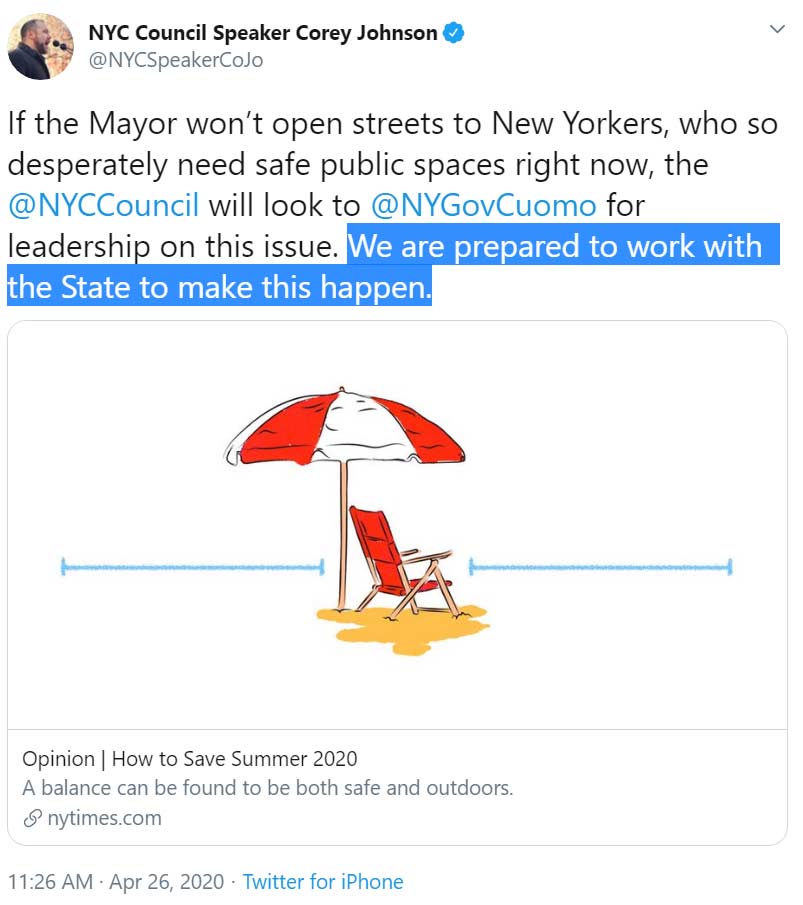 Yet yesterday, near about the same time the Speaker was posting his tweet, the Mayor said, “We’re having very productive conversations with the City Council,” when asked about this very subject.

Interestingly, Mr. Johnson’s tweet today, which omits any mention of the NYPD or the Mayor, would read as follows:

The @NYCCouncil is deeply grateful to all the advocates, BIDs, community groups, and passionate New Yorkers who worked with us to open streets. I also want to thank @NYGovCuomo who supported this idea early on as the pandemic was taking hold of our city.

When asked today, the Governor would state that yes, “you need streets that are open”.

How will it come about?

In addition to the Open Streets announcement, the Mayor expressed his continued concern about being able to carry out an open space plan while still being able to enforce it. He also stated how the NYPD would be working with community partners and BIDs (Business Improved Districts) to help facilitate the closures of certain areas.

“But one of the open questions is, you know, how permanent for the duration of this crisis, the barricades need to be or how temporary they can be, what will be effective. Yes, there has to be enforcement attached. Depending on the location, it might be more enforcement, other places it might be less, so long as again, there were trusted partners. Bids have come forward as one example. Certain neighborhood entities that work very closely with the NYPD, this is an idea that Commissioner Shea put forward. If NYPD has a working relationship with an organization and knows that they can rely upon them to manage something, and keep in touch if there’s a problem. That makes sense. So, and timeline to move obviously as quickly as possible through the month of May. But to start where we think there will be the most activity and then build from there. Details will be announced. You know, we have to deepen this process with the Council and with the agencies as we have the first tranche of the places that will occur, we’ll announce that.”

“…many of the questions I’ve gotten from all of you in the media … one of the most important places to open might be where a lot of people are going anyway and just give them more space since more and more people will go there when it gets warmer. That also is actually a more straightforward enforcement dynamic than if you’re trying to open a bunch of places all over. So, it was sort of a focus on where the need was greatest, both in terms of where people would go and obviously communities most affected, using some of the enforcement we were already devoting to those areas in an efficient way.

“…we felt  … a very important piece, revolved around community partners that could be open to create structures that, you know, if you were going to have a place closed off, there would be a constant effort to monitor it, to make sure it was safe. If there was any problem to get NYPD over there quickly, something with a little more structure than for example, what we saw in Oakland. So, I think there’s been a really good consensus that we can do something substantial while keeping the health and safety issues up front and ensuring the right kind of enforcement, more work with trusted community partners.”